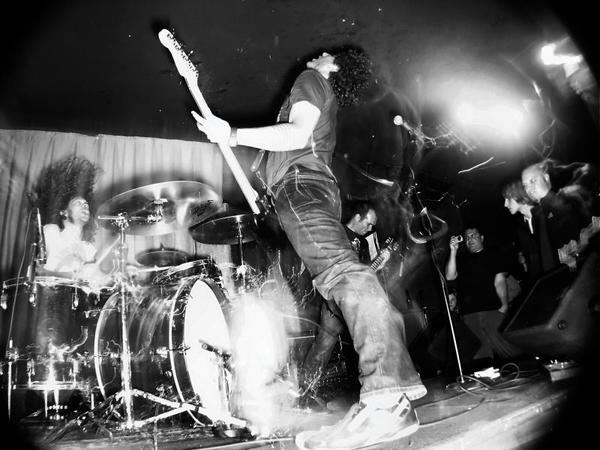 There are several artists performing as Akimbo:
1) Akimbo was a hardcore, punk and metal band from Seattle.
2) Akimbo is industrial band from Czechia
1) Akimbo was a long-lived band from Seattle, WA that effectively blends the styles of hardcore punk and classic rock.
Forming in the 90's, Akimbo went for a more progressive/punk approach in their earlier efforts (as seen on their split 10'' with Teen Cthulhu, and the "Army Of Evil Robots..." 7'' EP) before "finding their sound" around 2002/03 with the release of "Elephantine" their sophomore full length. Akimbo has toured inside (and out) of the United States relentlessly for several years, and has built a cult fanbase across the globe.
In 2005, they found a fan in Jello Biafra, owner of Alternative Tenctacles records, who signed them to his popular label. Their recent releases thrust them to the spotlight of the new rock movement.
Akimbo broke up in 2012.
Current Members:
Jon Weisnewski - Bass & Vocals
Nat Damm - Drums
Aaron Walters - Guitar
Former Members:
Jared Burke Eglington (2000-2006)
Dustin Brown (2002-2003)
Kyle Iman (1998-2000)
Stacy Schrag (USA Tour 2006)
Patrick Cunningham (Sept 2004-Oct 2005)
Demian Johnston (USA Tour 2003)
Chuck Rowell (USA Tour 2002)

Discography:
???? - Split 10'' with Teen Cthulhu
1999 - Army Of Evil Robots Programmed For Human Destruction 7'' EP
2001 - Harshing Your Mellow
2003 - Elephantine
2004 - City Of The Stars
2006 - Forging Steel And Laying Stone
2007 - Navigating The Bronze
2008 - Jersey Shores
2012 - Live To Crush
____________________
Info regarding homonymous Acid Jazz/Fusion band and their only album "On Top":
Akimbo band was formed when Nick van Gelder, original drummer of Jamiroquai met The Brand New Heavies' guitarist Simon J Bartholomew. Simon suggested Nick Seymour, Brand New Heavies' bassist to come along. With participations of Marcina Arnold on vocals, Jessica Lauren on keyboards and Kofi Kari Kari on Percussion, "On Top" album was recorded in a jamming atmosphere, with mostly instrumental tracks. A rare and a must-have for any Acid Jazz, Soul and/or Funk fans.
More info on their official MySpace website:
http://www.myspace.com/lovegongetya
2) History reaches the beginning of 80-ies. From that point on H and A start to realize the must of an extending of the definition of a music as such. In the late 80-ies R comes in between from the Grossheilendorf excile to iniciate the founding of Akimbo in the early 90-ies. After one year excercising in the neubaut on 24th June, 1993 the first appearance takes place in Sumperk, Czech Republic. At the end of 2 years existence a murder incident on the police station makes totaly exhausted H R A decide rather not to continue. In 2006 inescapable escalating discontinuation symptoms cause the resurrection of the project. 23rd June, after 14 years the comeback is effected. What follows is not a part of the history.
Output? Main equipments remain non-musical and non-verbal communication and manipulation. The sound can be besides the visual aspect assumed as another essential component. It is created by synthetizers, samplers, computers, guitars, rails, springs, irons, sheet metals, sirens, human voice, random accidents etc.
Lyrics are mainly highly personal, reflect particular acts, people, meetings, life's experiences of a negative limit of the possitive reality. For better understanding the transcendent voice distorter, group's own invention, is used. The content of the inapprehensible poetry is then more subliminaly sensed according to a context of a given situation. Besides vernaculat Czech we work with English, German, Latin, Polish, Russian, Spanish, French and Swedish.
Show is suggestive, multimedial, provocative, exhausting, shocking, ...
URL: http://www.myspace.com/akimboindustrial