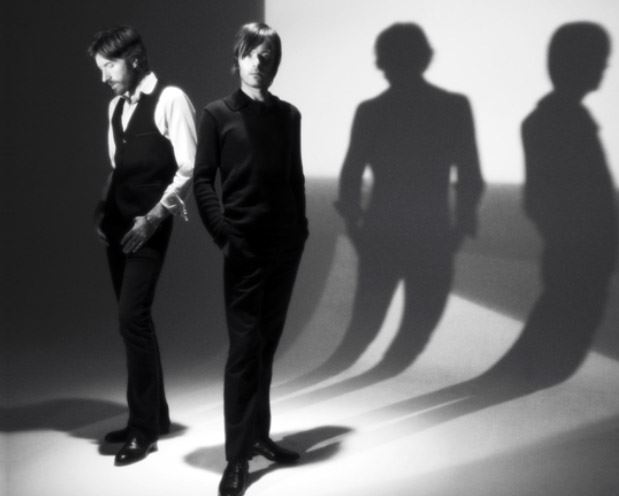 There are at least seven artists with this name:
1. A popular electronic music duo from France
2. A jazz trio from the United States
3. A noise rock band from Japan
4. An alias of ambient musician Pete Namlook
5. An alternative pop band from Indonesia
6. A pop group from the Philippines
7. A french synth-pop band also known as Air 89
1) The French band Air is a duo consisting of Nicolas Godin and Jean-Benoit Dunckel. They went to school in Versailles, (Lycée Jules Ferry) before forming the band in 1995. Their critically acclaimed first album Premiers Symptômes was followed by the release of Moon Safari, The Virgin Suicides (soundtrack), 10,000Hz Legend, and Talkie Walkie. In 2007, Air released the album Pocket Symphony and Love 2 in 2009. The Seven Stars Songfacts reports that Air was commissioned to write a new soundtrack for the premiere of the newly restored Georges Méliès' silent film, Le Voyage Dans La Lune, at the 2011 Cannes film festival. Despite Méliès' film only having a runtime of 14 minutes, Air still produced enough music to fill an entire album, which will be released as their seventh LP on February 7, 2012.
Although Air's music is often referred to as electronica or trip-hop and is often found in such bins in record stores, their form of electronic music actually owes more to the synthesizer sounds of the 1970s such as Jean Michel Jarre and Vangelis. Other influences that are more readily apparent than house and techno are psychedelic rock pioneers Pink Floyd and Krautrockers Tangerine Dream (although there are some echoes of dance music styles in the production). Another influence is French crooner Serge Gainsbourg. Air's music also has jazz inflections at times, and their ability to improvise is more clearly highlighted in the live arena. Before they founded Air, JB and Nicolas played together in the band Orange, with others such as Alex Gopher, Xavier Jamaux and Etienne de Crecy names which have recently reappeared in connection with Air's remixes. The name stands for "Amour, Imagination, Rêve", which translates to Love, Imagination, Dream.
Air uses many of their studio instruments (like Moog synthesizers, the Korg MS20, Wurlitzer and Vocoder) live on stage. The band performs the well-known tracks from the albums live as extended or altered versions. Air often works together, both in the studio and live on stage, with artists like Beth Hirsch (Moon Safari), Françoise Hardy ("Jeanne"), Jean-Jaques Perrey ("Cosmic Bird"), Gordon Tracks ("Playground Love" and "Easy Going Woman"), Beck (10,000Hz Legend) and, on the 2004 tour, with Dave Palmer and drummer Earl Harvin. On their 2007 album "Pocket Symphony", more guest writer and vocalist appearances were made by Jarvis Cocker and Neil Hannon (of The Divine Comedy. For the 2007 tour that accompanied the record, the band consisted of Earl Harvin on drums, multi-instrumentalist Steve Jones (steviejjones) and French keyboard player Vincent Taurelle.
Their music has also frequently been used in commercials. "Surfing on a Rocket" is the background music for the Nissan Armada commercial (2005). "Playground Love" was used in a Levi's jeans commercial (2002). A number of their songs are used as the background music for the BBC 2 show "Top Gear" in their films about exotic sports cars.
They recently contributed to Charlotte Gainsbourg's second album, "5:55".
2) Air was a jazz trio with its roots steeped in Chicago's Association for the Advancement of Creative Musicians (AACM), and was formed originally in 1971 or 1972.
The jazz trio Air formed from within the Muhal Richard Abrams Sextet, which was active on the Chicago scene contemporaneously with the birth and growth of the AACM and groups such as the Art Ensemble of Chicago. Henry Threadgill on reeds, hubcaphone, and percussion; Fred Hopkins on bass, and Steve McCall on drums formed the trio when Threadgill was commissioned by Columbia College to score and adapt Scott Joplin's work for a performance honoring Joplin's centenary (Joplin's birth has been established now as sometime in 1868) and a rebirth of interest in the noted ragtime composer. All three men were Air signs in the zodiac, and so adopted the name.
They performed first around Chicago, while maintaining residency with Muhal Abrams group, which also featured Kalaparusha Maurice McIntyre and Wallace McMillan, both reed players. The Air "brand" remained a side project until all three reunited in New York in 1975, and began recording under that name for India Navigation, Nessa, Black Saint, and Novus. The trio broke up when Steve McCall left in the early 1980s, and when Pheroan Aklaff joined in 1982, they recorded as New Air, and recorded several albums under that name, including Air Show No. 1 in 1986, which featured Cassandra Wilson on vocals. Andrew Cyrille ultimately replaced akLaff before the band eventually was superceded by the burgeoning careers of its members: Threadgill with his groups Sextett and Very Very Circus, and Hopkins as the go-to bassist for Threadgill, David Murray, and Hamiet Bluiett. McCall's health forced his retirement from touring around 1980, and the dynamic drummer and effusive and gracious man who was a cofounder of the AACM with Muhal Abrams and Fred Anderson, died of a stroke in 1989.
This Air is listed as Air (4) on Discogs and is also been identified on last.fm as Air (Fred Hopkins, Steve McCall, Henry Threadgill) and Air with Fred Hopkins, Steve Mccall, Henry Threadgill (sic: McCall's name misspelt), and possibly also other alternative spellings of the group's name exist.
3) Japanese noise rock, Air is an alias of Koji Kurumatani.
4) Air is one of the many aliases of Pete Namlook. He has been releasing ambient music under this name since the release of an eponymous album in 1993.
5) Air is an Indonesian Pop band that became popular with their "Bintang" song
7) Air/Air 89 were a French New Wave, Synth-Pop trio founded in 1983.
Featuring the leader/frontwoman Claudie Fritsch-Mentrop alias Desireless (vocal), Fred Milgram (bass), Miguel Perchey de Oliveira (guitars) and the songwriter/producer Jean-Michel Rivat.
Released singles : Cherchez l'amour fou / À l'arrière de la Cadillac (1984) as Air89, Qui peut savoir / Star (1986) as Air.
Claudie left the band to pursue a solo career in 1986.