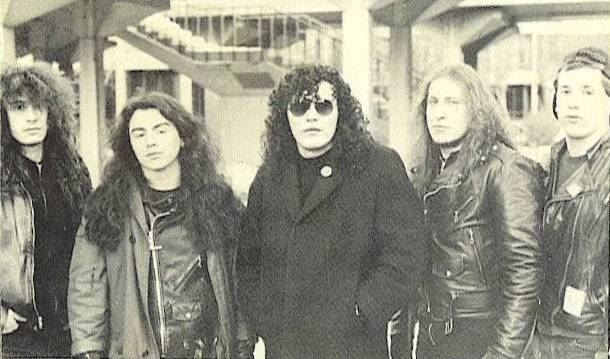 There are at least ten artists with this name:
1. An all-female rock band from Japan
2. A brony musician from the United States
3. A thrash metal band from Chicago Illinois, United States
4. A symphonic metal band from Sweden
5. A math rock band from Mexico
6. A speed metal band from Arizona, United States
7. A darkcore group from Australia
8. A heavy metal band from the United Kingdom
9. A Trash metal band from Indonesia
10. A metalcore band from Sydney, Australia
11. A hardcore band from Connecticut
12. An old death metal band from Sydney, Australia
13. A Hardcore Punk band from Tlaquepaque, Jalisco, Mexico
1. July 2013 formed, live activities start in September of the same year. At the same time, published a PV "Break the Ceiling" live activities start with. I break through the playback number 2,000 times from the public in one week. Then, topped playback number 7,000 times in about half a year. The predecessor vocal withdrawal in December 2013. Through the pause of about 4 months, and welcomed the new vocal Bear from April 2014, to restart.
Vo.-Bear
Gt.-Kiko
Ba.-Ami
Dr. -Tomoe
http://www.aftermath-jpn.com
2. Aftermath specializes in house and trance music, but is open to working with most electronic genres. He does remixes of the show, original songs, and remixes of original songs by other brony musicians. He also firmly insists that Pinkie Pie is the best pony.
3. Chicago based AFTERMATH, fronted by the Greek born Kyriakos "Charlie" Tsiolis, formed in October 1985 when Charlie and his schoolmate Steve Sacco (Guitar) got together. This early incarnation with Adam (Bass) issued their first demo called "Sentenced To Death" in 1986 featuring 'Sentenced to Death', 'Revenge', 'Shotgun' and 'The Aftermath'.
In 1987, followed their underground acclaimed second demo entitled ‘Killing The Future’ featuring the tracks ‘When Will You Die’, ‘Going No Place’, ‘Chaos’, ‘Meltdown’ and ‘War For Freedom’. The band pursued a technical minded brand of Thrash that soon set them apart from the pack.
"War For Freedom" & "When Will You Die" were both featured on the British ‘Metal Forces’ magazine compilation LP ‘Demolition: Scream Your Brains Out’ in 1988. Among tracks from Leviathan Chris Barnes (Six Feet Under) on Vocals), Hobbs' Angel Of Death, Anacrusis & Atrophy.
John Lovette filled in as bass player when Adam left. John never played bass on any Aftermath recordings but he wrote most of "Words That Echo Fear". He later switched to second guitar when Danny came in.
A further demo ‘Words That Echo Fear’ featuring bassist Danny Vega was released prior to the band demoing for Roadracer Records. A live four track demo featuring the songs ‘Eyes of Tomorrow’, ‘Afraid Of Time’, ‘The Act Of Unspoken Wisdom’ and 'Reflecting Pictures’ was released. Negotiations broke down however and AFTERMATH signed to New York’s Big Chief Records. However, this label collapsed forcing AFTERMATH to issue the album under their own steam on the private Thermometer imprint with Chris Waldron on Bass duties. Chris was in the band the longer as a bass player and the best fit for the band.
First album was finally released under the Title "Eyes Of Tomorrow" in 1994 on Thermometer Sound Surface / Zoid. Black Lotus re-issued it later in a remastered version.
Quite famously as AFTERMATH the act lost a notable court case Tsiolis v. Interscope. Records. Inc., 946 F.Supp. 1344, 1349 (N.D.III. 1996) with high profile millionaire rapper DR. DRE over the ownership of the name. The Rapper reportedly made a conciliatory offer of some $50,000 for rights to use the name but would go ahead and use it regardless. Fortunately for the band this period of turmoil had built bridges with Interscope Records. After the name change to MOTHER GOD MOVIESTAR they signed to Interscope for the eponymous Electro-Metal debut of March 1998. The case has been studied in law schools around the nation related to the issue of trademark dilution.
In January of 1997 the group, retaining a stable line up but augmenting their sound with the addition of DJ Delta 9 and female vocalist Roxanne, retitled themselves MOTHER GOD MOVIESTAR opting to pursue an alternative Rock direction.
Aftermath has continued to receive critical acclaim as one of the major influences in the genre. The band is featured on pages 9 and 10 of Gary Sharpe-Young's A - Z of Thrash Metal available on Cherry Red Books.
4, Aftermath is the name of Swedish female fronted metal band. In 2008 they released their debut album Tides Of Sorrow.
5. There is a mexican math rock band called Aftermath.
6. Aftermath is a speed metal group from Arizona
7. Aftermath is a former darkcore project from Australia. Having two vinyl releases and one compilation, it was disbanded circa 2004;
8. A heavy metal band from Sheffield, England
9. Aftermath, a metalcore band from Sydney, released their demo in 2010 and have been playing huge breakdowns ever since