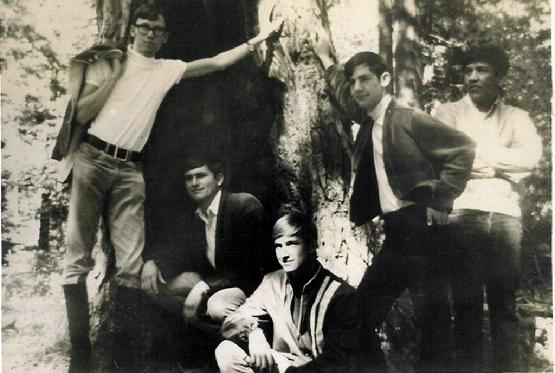 1) Afterglow from Chico, California. The quintet consisted of Larry Alexander (drums), Ron George (bass), Gene Resler (vocals), Roger Swanson (keyboards) & Tony Tecumseh (guitar). The band were originally known as The Medallions. Afterglow released a single, eponymous album in 1968 on the MTA label (In 1995, the album was re-released on Sundazed Records). Album was produced by Larry Goldberg and Leo Kulka (aka Leo De Gar Kulka, a regular at Golden Gate studios, in San Francisco), consists of soft pop with a tinny organ backing and memorable tunes. Some of the tracks such as Susie's Gone, It's A Wonder, and Afternoon are extremely psychedelic.
Another band is a five-piece set from Marseille featuring Reno Ferré on lead guitar, Karim Abdelali on drums, François Festy on keyboards and vocals, Claude Figge on congas and Freud Chaudeaux on lead vocals (Chaudeaux sings in English and sounds a bit like Steve Hoggarth). Deftly avoiding overly simplistic formulas, their style is a savvy combination of hard material from the old guard (SAGA, RUSH) and more modern neo-progsters (PENDRAGON, IQ).
A third, is a rock band from Copenhagen, Denmark. Founded by Michel Tyedmers (vocals) and Gert Breitenkamp (drums & guitars) in 2001. Formerly members of The Black Rose, a Thin Lizzy Tribute band.
4) Joel McCausland and Kevin Peay are better known to thousands of loyal fans around the world as the musical duo AFTERGLOW. Joel and Kevin began their musical career together over 30 years ago in Pleasant Grove, Utah. As Juniors in High School they began singing together at school assemblies and performing for community groups and at local fairs. They eventually presented LDS firesides and concerts in the United States prior to their missions in Japan and St. Louis in 1980. In 1984 Deseret Book signed AFTERGLOW to a recording contract. They have since recorded 17 albums for Deseret Book, five of which were recorded in England with the London Philharmonic Orchestra. A few of these albums include: 'A More Perfect Light', 'How Great Thou Art', 'Love at Home', 'Forever Christmas', and 'Another Witness'. These titles and other AFTERGLOW works are found on AFTERGLOW two CD sets titled, 'Special Edition Volume One', 'Volume Two', '25th Anniversary Edition', Volume Four', 'Christmas Classics'. Joel and Kevin also recorded two love song albums titled 'It Takes Love' and 'Love Notes' and two Nashville produced country albums titled "Close to Home' and "No Love Lost'. Both the love song and country albums are compiled on a two CD set titled AFTERGLOW 'Versatility'. Joel and Kevin have traveled extensively over the years performing and recording in the United States, Canada, England, Japan and Brazil. In addition, AFTERGLOW returns recently with Mercyville, a collection of new original songs written to celebrate the joys and challenges of life. Messages including serving others, dealing with loss, experiencing joy and finding our way through life's trials. Afterglow's new CD brings warm harmonies and heart-felt emotion that enhances every day living.
Fifth is a band from Melbourne, Australia that released a 7" for the Summershine label in 1992, followed by a couple of EPs. Singer/guitarist Greg went on to join Snout.