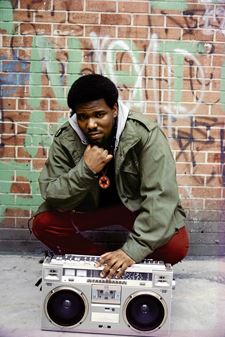 Afrika Bambaataa (born April 10th or October 4th, 1957 or 1960; though his birth-date is hotly debated as he refuses to comment on his age) is a community leader, DJ, and Hip-Hop musician from the South Bronx, New York. He was instrumental in the early development of Hip-Hop throughout the 70s, and he has played a significant role in its culture for years.
During Bambaataa's early years, he was a founding member of the Bronxdale Projects-area street gang, which was called iThe Savage Seveni. Due to the explosive growth of the gang, it later became known as the iBlack Spadesi, and Bambaataa rose to the position of Division Leader. After a life-changing visit to Africa, he changed his name to Afrika Bambaataa Aasim. Bambaataa felt influenced by the depiction of the Zulu warriors attacking British troops at Rorke's Drift in a famous Michael Caine film, titled 'Zulu', and he felt compelled to fight for unity, education, and mutual respect in his community. He took his name, which roughly translated to "affectionate leader", from the film.
After the visit, Bambaataa decided to use his leadership to turn those involved in the gang life into something more positive to the neighborhoods around him. This began the development of 'The Organization', which later became known as the 'Zulu Nation'. The group of racially and politically aware rappers, B-boys, graffiti artists, and other people involved in hip hop culture gained fame in the early eighties to mid nineties. By 1977, inspired by DJ Kool Herc, Bambaataa had begun organizing block parties all around the South Bronx, and he was soon renowned as one of the best DJs in the business. In 1980, he produced Soul Sonic Force's landmark single, "Zulu Nation Throwdown". In 2000 Rage Against The Machine covered Afrika's song "Renegades Of Funk" for their album "Renegades". His beats have been sampled by countless other artists.
In 1982, Bambaataa organised the very first European hip hop tour. Along with himself were rapper and graffiti artist Rammellzee, Zulu Nation DJ Grand Mixer DST, B-boy and B-girl crews The Rock Steady Crew, and the Double Dutch Girls, as well as legendary graffiti artists Fab 5 Freddy, Phase 2, Futura 2000, and Dondi.
Also in 1982, Bambaataa became a solo artist (having produced several other singles) and released "Jazzy Sensation" on Tommy Boy in that year. "Planet Rock", the most popular 12" single ever, came out that June under the name Afrika Bambaataa and the Soul Sonic Force. The song melded electronic hip hop beats with the main melody from Kraftwerk's "Trans-Europe Express", as well as portions from records by Ennio Morricone and Captain Sky - thus creating a new style of music altogether, electro funk. It influenced many styles of electronic and dance music, e.g. house and techno. In 1984, Bambaataa recorded "Unity" with James Brown and released "World Destruction" under the name Time Zone (with John Lydon). "Shango Funk Theology", a full length album, came out under the name Shango. This was followed by "Funk You" in 1985 and then his formal full album debut, "Beware (The Funk Is Everywhere)".
Bambaataa then left Tommy Boy and signed with Capitol Records, released "The Light" (as Afrika Bambaataa & Family), which included aid from George Clinton, Bootsy Collins, Boy George and UB40. "1990-2000: Decade of Darkness" was released in 1991. It included both hip house tracks that were produced by the Italian team De Point (most of those have been collected on ZYX´s "The 12" Mixes" Compilation) as well as hip hop and electro funk tracks. Together with the same producers, he released more dance music on an album and some singles under the name Afrika Bambaataa pres. Khayan & The New World Power. On "Warlocks and Witches", Bam (as his name is often abbreviated) focused on hip hop. From the mid-1990s, Bam returned to his electro roots, collaborating with Leftfield and Westbam (who was named after him) and culminating in 2004's excellent album "Dark Matter Moving at the Speed of Light" which featured Gary Numan and many others. In the same year he released "Everyday People The Breakbeat Party Album". In the end of the 1990s, he published the Miami Bass influenced "Lost Generation" album together with the Soul Sonic Force, and founded the band Hydraulic Funk for some rnb and breakbeat music. Together with DJ Hardy Hard he founded the electro funk duo Sirius B. feat. Hardy Hard And Afrika Bambaataa.
Together with his worldwide Zulu Nation, Afrika Bambaataa works hard to give the Hip Hop community a lot of positive energy and knowledge. They have several meetings and music events every year. The biggest is the Zulu Nation and Hip Hop Culture Anniversary week that happens in New York every November and attracts Hip Hop pioneers, Zulu Nation members and fans from the whole planet. On meetings they spread knowledge about the development of the Hip Hop scene, and talk about political and social things. Afrika Bambaataa is one of the rare artists who knows about the role model funktion that each important musician has for the listeners and fans, and what everybody can do to make the best of it. So he said a lot of critical words about politics in the United States, Africa and other continents, violence, hate and racism of the present time and the past, Hip Hop developments like Gangsta Rap, as well as the poor choice of Hip Hop in the commercial mainstream media. In the 1980s, he took part in the international music project "One World One Voice" what was about the protection of the environment. More similar band projects were "Sun City" and "Hip Hop Artists Against Apartheid". On WHCR, a radio station in Harlem, New York, Afrika Bambaataa has a weekly show together with Lord Yoda X from the Crash Crew and other Zulu Nation members, where he plays his choice of music and brings the latest informations.