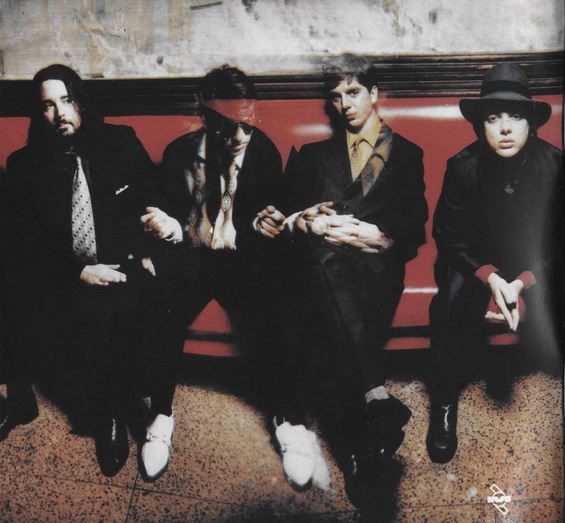 American band the Afghan Whigs are a soul-influenced, alternative rock band best known for their material in the 1990s. While achieving only moderate commercial success, the Afghan Whigs attracted ample critical acclaim and deeply loyal fans, Rolling Stone described the band as spending "the bulk of their career on the brink of stardom", yet they've "never quite broken beyond a substantial legion of devotees enamored of their thinly veiled sleaze."
Formed in Cincinnati in 1986, Greg Dulli (vocals, rhythm guitar), Rick McCollum (lead guitar), John Curley (bass), and Steve Earle (drums -- not to be confused with country musician Steve Earle) .
In 1988, they released their debut album Big Top Halloween on their own Ultrasuede label. The album caught the attention and imagination of the independent music community and the band soon signed to Sub Pop of Seattle in 1989. Sub Pop's signing of the Afghan Whigs created quite a stir at the time as they were the first non-Northwestern U.S. band to record for the label.
In 1990, their first Sub Pop release Up in It was released; the blistering pace and yowling, effects-heavy guitars on tracks like "White Trash Party" gave no hint of the stylistic about-face to come. It was followed by a limited edition single released by No.6 Records under the name The Ornament.
With the critically acclaimed 1992 album Congregation and a limited covers EP, Uptown Avondale, the band adopted what would become their signature soul-influenced sound.
Soon the Afghan Whigs signed to a major label, Elektra Records, and in 1993 released another critically acclaimed album, Gentlemen. Although the singles “Debonair” and “Gentlemen” were fairly popular, the album failed to launch the band into the mainstream.
Beside regular appearances on MTV's playlists, their track "Fountain and Fairfax" also appeared on the television series My So-Called Life in 1994.
Despite personnel problems interfering with recording and touring, 1996 saw the band release the noir-influenced Black Love (the album featured Paul Buchignani on drums in place of Steve Earle). Although the main subject matter in previous releases were liquor-drenched obsession, secrets and misery, Black Love was a step into a more dark, even seedier and complex side of Dulli’s persona.
In 1996, Greg Dulli served as executive producer for the soundtrack for the Ted Demme film Beautiful Girls. the Afghan Whigs appeared in the film as a bar band and contributed two songs to the soundtrack (Frederick Knight’s "Be For Real" and Barry White's "Can't Get Enough of Your Love, Babe").
In 1998, the Afghan Whigs released their 6th album, 1965, on Columbia Records (Michael Horrigan, former Love Cowboys bassist replaced Buchignani). The album saw the band on inspired form. Sadly, it was the band's last full-length album of original material.
Despite reports that the band had started work on their 7th album, the Afghan Whigs announced their split in 2001, citing the strain of geographic distance between members as the reason.
In 2006, the Afghan Whigs temporarily reunited. The ‘1965’ lineup (Dulli, McCollum, Curley, Horrigan) recorded two new tracks ("I’m A Soldier" and "Magazine") which are featured on their retrospective titled Unbreakable (A Retrospective) which was released in June 2007.
In December 2011, the band announced that it would be appearing at All Tomorrow's Parties' renowned I'll Be Your Mirror festival on May 25-27, 2012 in London, England. As well, Dulli will serve as the curator, and the Whigs the headliner, for ATP's stateside edition on September 22nd, 2012 in Asbury Park, New Jersey; further dates continue to be announced, including major summer-festival headlining spots at Spain's Primavera, among others. Drummer Cully Symington (Okkervil River, Gutter Twins) and multi-instrumentalist Rick Nelson (Polyphonic Spree, Twilight Singers) will join Curley, Dulli, and McCollum for all shows, which will feature songs from the entire span of the Afghan Whigs repertoire, along with a few new surprises and songs never before played live.
These developments provided both surprise and relief for the group's members. "The pressure is really nonexistent, because we're playing songs that we've already completed - that we already know," Dulli says. "Those songs still resonate with me; in fact, they have always resonated with me. I imagine there will be people who never saw the band before, too, and that's exciting." "It will be nice to experience the Whigs again as a grown-up," jokes Curley. "In my mind, the Whigs were a live band above anything else. Playing shows always was our favorite part about being in the band, and the times when we felt the most freedom and release. I missed playing at that level; I missed playing the songs that we wrote, that meant so much to people - and to us." (from www.theafghanwhigs.com History). In 2014 they released "Do to the Beast" and performed in Ireland, Israel, and the U.S.