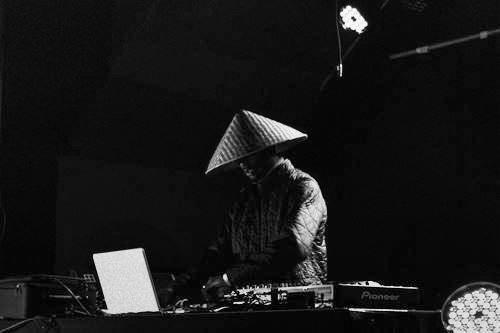 There are at least four artists known as Actress.
1) Actress is the artist alias of London’s Darren Cunningham. If you’re looking for clues to his music, you’re better off starting with "Hazyville", the title of his debut album. The record presents a landscape as blurry as its title, with house and hiphop beats dissolving into a spray of bits and tape hiss. When "Hazyville" came out in 2008, it sounded unlike anything else out there — you could hear echoes of the familiar (Moodymann, Jan Jelinek, ‘80s R&B, wonky), but it was spun into an uncanny kind of dreamstate.
Cunningham also runs Werk Discs; the label had something of a hit in 2008 with Zomby’s "Where Were U in '92?", and its roster runs from the street-bass sounds of Philadelphia’s Starkey to the brilliant instrumental hiphop of Lukid and Lone.
Much of Actress’ music is deliberately lo-fi, suffused with the slippery grit of encoding errors and low-bitrate YouTube videos, to the point that the distortion and compression become strangely beautiful in their own right. It’s the modern-day equivalent of boom-bap hiphop’s preference for scratchy wax, which makes sense, since today’s crate-diggers are increasingly discovering the musical past not through thrift-store vinyl, but dubious VHS dubs uploaded to the web, grainy and flickering with errant pixels.
Actress’ music has continued to evolve across singles for Prime Numbers, Nonplus, and Honest Jon's, taking on even greater range and depth, but without losing its own particular character. His second album, "Splazsh", came out on Honest Jon’s at the end of May 2010, combining his previously used compression tricks and lo-fi atmosphere's with a more prominent sample collage technique; techno as re-imagined by Kurt Schwitters.
His third album, R.I.P (released in April of 2012) saw Actress stepping into a more ambient realm, with the 4/4 kick receding into the background in favour of more abstract analogue textures. The album follows a sort of narrative, providing a soundtrack for death and the afterlife; the reduction of beat-based compositions seems to have arrived with an increase in conceptuality.
2) Former chaos / 'noise rock' band, from Wiesbaden, Germany. After numerous gigs in Germany and Luxembourg, it was time to conquer new landscapes. These 3 young boys combine the best of Converge, The Dillinger Escape Plan, Botch and other noisy cult bands. They also shared the stage with artists such as: Daughters, Zann, Eaves, Loftus, Tephra, Hewhocorrupts, Seven Bowls Of Wrath, Endless Inertia, Since By Man, Trainwreck, Planes Mistaken For Stars and many others. They now perform under the new name Radare.
3) Duo of brothers Aaron and Josh Ficchi in Hollywood, Ca. Electro-synth-pop, they released Dress It Up In Stereo EP in 2009. Available as free download at their label page: http://rcrdlbl.com/artists/Actress/music - http://www.myspace.com/actress
4) Actress was an American rock band featuring Johnny Thunders (vocals/guitar), Arthur "Killer" Kane (bass), Rick Rivets (guitar) and Billy Murcia (drums). In 1971, soon after some demos were recorded, David Johansen joined as vocalist forming the original line-up of the legendary New York Dolls. The same year Rivets was replaced by Sylvain Sylvain and Murcia died (at age 21) the following year after a Dolls concert. Jerry Nolan filled in as drummer. This is the line-up on the Dolls debut album.
"Actress: Birth Of The New York Dolls" was released containing all the Actress demo recordings. Recordings of the original Dolls line-up were released on the "After The Storm" LP in 1985 and "Lipstick Killers" in 1990.