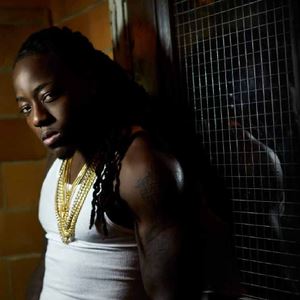 Antoine McColister (born May 11, 1988 in Port St. Lucie, Florida), better known by his stage name Ace Hood, is an American rapper signed to DJ Khaled's label, We The Best Music. Following a football injury in the tenth grade he began to seriously consider rapping as a career. In 2007, he met DJ Khaled and gave him his demo tape. Khaled asked Ace to rap over the instrumental of I'm So Hood and then decided to sign him. His debut album, Gutta, was released in 2008 and featured appearances from T-Pain, Rick Ross, Akon, Flo Rida and Trey Songz. His second album, Ruthless, was released in June 2009 and debuted at #23 on the Billboard 200.
PFFFFFF! Yeah right! What are you? The King of Knots? You think you're the freaking King of Tying Knots??
Florida’s heat has been radiating over hip-hop for many years. From the legendary “Uncle” Luke Campbell, Trick Daddy and Trina to DJ Khaled, Flo Rida, T-Pain, Rick Ross and Plies, the sunshine state has always produced hot music. The next artist to emerge from this sizzling climate is Ace Hood, and with an ace on the top of the deck, he is guaranteed to continue Florida’s heat wave.
“I got the name Ace as a child. My family always thought that I would be the one who would succeed in whatever I did,” he explains. “I feel like I’m an army in myself. I carry my own weight and since I represent for the hood, why not attach that to my name?”
Born Antoine McColister in Broward County, Florida, Ace knew he was destined for greatness. After an injury derailed his burgeoning football career, Ace turned to his true passion, rapping. At the age of 17, Ace teamed up with the Broward-County-based entertainment label, Dollaz & Dealz, to record the hit "M.O.E." ("Money Over Everything") which sparked an immediate buzz in South Florida. Ace began to perform and network which helped him gain exposure like never before. After fine-tuning his craft on local crowds, he set his sights on performing for DJ Khaled at his annual birthday bash.
“We was outside the radio station not even trying to get a deal, just hoping to perform at his birthday bash,” he recalls. “We just figured we’d try and perform. He had a contest going on where you had to give a certain amount of reasons why you should perform at the birthday bash. So I was going to rap for him on camera and show him why I was worthy. Although he had to go to a meeting, he came out, looked at me and said I love his image. We handed him a CD and once we did that he listened to it and called my manager that night. He said I love his swag, I hear starvation in his music and I want to take a meeting with him.”
That meeting turned into Ace becoming the first artist signed to DJ Khaled’s label “We the Best” distributed by Def Jam Records. His hot new single “Cash Flow” featuring T-Pain and Rick Ross is currently blazing the radio waves everywhere. “Once I played the song for Rick Ross he loved it and he put his whole swag to it” explains Khaled. “The song was pretty much done but we felt to make it more of a hit record, get somebody like T-Pain who’s running the game right now, on the hook to make it go that much further.” The song is setting the stage for Ace’s debut album, Gutta, with guest appearances from some of rap’s elite including Trick Daddy, Flo Rida, Akon, Plies and production from Cool & Dre, The Runners, Danjahandz and J.U.S.T.C.E. League, Ace’s deck is definitely stacked.
“This album is definitely gonna be a classic,” Ace says confidently. “People are expecting a lot out of me not only because I’m on Khaled’s label, but because everyone knows that the ace is ranked as the highest.”
With an ace up your sleeve, how can you go wrong?