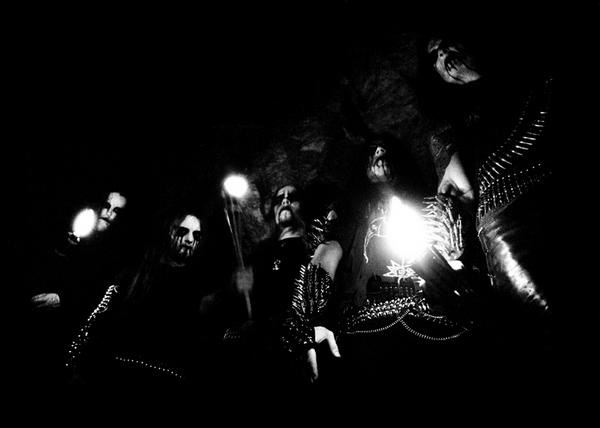 1349 is a black metal band named after the year that The Plague arrived in Norway. 1349 rose from the ashes of Alvheim in 1997 in Oslo, Norway with Ravn on vocals & drums, Tjalve on guitars, Seidemann on bass and Balfori on guitars. They recorded but never released a demo in early 1998, and Balfori quit shortly after due to musical differences.
In early 1999 they re-recorded the never released promo Chaos Preferred. Then, the band realized they needed another guitarist, and found Archaon whose speed and technique took their music to a new level of intensity and brutality.
Come spring 2000, 1349 decided to record a new promo showcasing the new material, and Frost of Satyricon was asked to lay down the drum tracks to get the speed required. Frost was later so impressed by the material, that he asked to join 1349 as a permanent member. Holycaust Records offered them a deal and released the new promo as an eponymous MCD. By early 2001, the band felt they had enough killer songs for a full-length album - Liberation. Recorded and mixed at Gordon Studios, Liberation blended old school soundscapes with warp-speed hysteria. In the wake of such yet unreleased but unforgiving material, 1349 supported Gorgoroth, Cadaver Inc.and later performed at the Hole in he Sky festival in Bergen in 2001, as well as the Inferno festival in Oslo in 2002. After signing a new deal with Candlelight Records, Liberation was released in April 2003.
This was the year when 1349 began to reap the fruits of their dark labour - their debut album received critical and public acclaim and several magazines hailed the band as The Newcomer of the Year. They were rebooked to play the Inferno Festival, and on Germany's high profile With Full Force Festival, where they shared stage with such high calibre bands as Zyklon, My Dying Bride and Moonspell. Their first European Tour with compatriots Aeternus and Red Harvest in November ended the year on a high for 1349.
No rest for the wicked, however, and only a month after returning from the tour, the band entered Studio Studio Nyhagen to record the follow-up to Liberation. Released by Candlelight Records in April the following year, Beyond the Apocalypse helped 1349 secure their quality old school black metal reputation. On top of touring with Gorgoroth during fall 2004, 1349 performed at Aalborg Metal Fest in Denmark, Nihil Extreme Music Festival in Italy and Arnhem Metal Meeting in the Netherlands, as well as the Hole in the Sky, Månefestivalen and Working Class Hero Festivals in Norway.
Hellfire, the bands 3rd album, recorded at Studio Studio Nyhagen in the course of 2005, is their most powerful musical offering so far. 1349 have refined their highly reputed sound into audible hellfire! Hellfire has received massive acclaim by fans and critics alike, scoring 5 K's in KERRANG! and becoming album of the month in Terrorizer. When the time came to hit the road in autumn 2005 1349 once again chose Gorgoroth as their touring partners and spent 5 weeks spreading the plague through Europe.
2006 started out with gigs at Metalmania Festival in Poland and Club 10 in Asker, Norway. After this Frost had to take a break from 1349 to work with Satyricon the rest of 2006. Session drummer for the No Mercy Festival in Antwerp, Belgium and Tillburg, Netherlands was Tony Laureano. Frost had a small break from the busy schedule of Satyricon to perform with 1349 at Kroa in Bø, Norway.
In June guitarist Tjalve left the band to concentrate his musical efforts on his band Pantheon I. 1349 continues as a quartet and use session guitarists for live performances.
Autumn 2006 was a time for concerts and touring. 1349 played at the Summer Breeze, Hole in the Sky and Hellflame festivals with session drummer Tony Laureano (Ex. Nile, Angel Corpse, Brujeria, amongst others) and session guitarist Teloch (Nidingr). A week was spent in the UK with Enslaved, Zyklon and Insomnium before 1349 embarked on their first ever American tour, supporting the legendary Celtic Frost. 1349 also took the time to play a headliner show at Safari Sams in Hollywood as well as 3 gigs in Mexico. 2007 sees the band visit the US shores for their first headlining tour ever, as well as extensive performance through the biggest festivals in Europe.